A new year brings new opportunities to sell and it is time to get set for 2019. Every holiday is a chance to make your sales soar, so why lose out on even a single one? Which is why weŌĆÖre here with the 2019 retail calendar with some of the best marketing ideas weŌĆÖve seen this year to inspire you.

The Super Bowl season is a sensation- that much is clear from its average viewership of 103.4 million people in just the United States in 2018. But if youŌĆÖre wondering why itŌĆÖs important for retailers like you, consumers spend, and spend big, around the time.

It is no surprise really that Amazon is pushing to make Alexa the medium for voice-based shopping in the coming season. The 2018 Super Bowl season was predicted to see a whopping $15.3 billion spending according to the National Retail Federation. So, retailers would do well by marketing their products and brands during the upcoming one.

A brilliant example of a retailer that won with its marketing campaign during the 2018 Super Bowl was retail giant Amazon. Always known to be the best of the best, the brand did a hilarious take on its voice assistant Alexa losing her voice while tying together the Super Bowl itself. The commercial continues to be viewed since its air date in January and has as many as 50.1 million views on YouTube currently.

While Amazon may seem hard to match up to, why not take inspiration from the retail behemoth and create a spell-binding presence for yourself with a fun campaign this Super Bowl Sunday?

The day of love can also be a great time to boost your sales if you have an effective strategy. It may even get CupidŌĆÖs arrow to strike your shoppers and get them to fall in love with you!

The Body ShopŌĆÖs Kissing Contest on Instagram was a perfect example of this. All it needed participants to do was to follow the brand and send photos of themselves blowing a kiss to a friend with the #SendingAKiss hashtag. The winner would get gift packs of the Body ShopŌĆÖs products.

This campaign was exceptionally well done as it got the brandŌĆÖs liquid lipstick sales soaring and increased its follower count dramatically.

If you intend to sell more during the 2019 St. PatrickŌĆÖs Day, know that anything green will probably work because shoppers automatically connect the day with the traditional green-themed celebrations.

The donut making brand turned its Original Glazed Donuts green for the holiday last year and generated a lot of buzz about it through social media a week in advance. Its tweet to announce the donuts alone got as many as 2600 likes! Customizing your products the way Krispy Kreme did shows that holiday sales arenŌĆÖt the only way to make profits on this day.

You could even use clover-leaf arrangements to deck your store or online webstore to symbolize the traditional shamrock.

While stocking up on Easter eggs or organizing an Easter egg hunt is usually the way to go to drive sales during this holiday, youŌĆÖd do well to come up with an out-of-the-box idea to implement either strategy.

An example of this is CadburyŌĆÖs 2016 Easter egg campaign. Although the brand usually has an Easter egg hunt every year, it decided to change things up by placing 3 huge eggs in Loch Ness to make it seem like a play on the sighting of the Loch Ness monster.

Although it may have seemed extremely random, the campaign worked quite well for the confectionary giant as it was unique and h.ad immense recall value. Just another example of tuned-in marketing!

The National Retail FederationŌĆÖs expected spending around MotherŌĆÖs Day for 2018 was $23.1 billion with every American spending an average of $180. So, you would certainly do well to make the most of numbers like this.

Jewelry brand Pandora has been known for the effort it takes to customize products for its shoppers. But recently, a lot of other jewelry brands have been following suit and providing similar offerings.

So, Pandora decided to portray itself as a brand that understands its consumers well and came out with a beautiful ad that would resonate with its shoppers for the 2018 MotherŌĆÖs Day. The ad showed a woman changing a tire, speaking to the power and strength of women today.

While customization works great, the idea is to make your brand stand out and stick in your target shoppersŌĆÖ minds.

While gifting ideas for fathers have remained more or less the same over the years, you could take the standard and give it a beautiful twist ŌĆō much like beer brand Michelob Ultra did.

While nothing is more stereotypically dad than beer, Michelob took to its #UltraDad campaign yet again in 2018 to celebrate father figures, not just biological dads. Besides the video ad showing dadsŌĆÖ emotional side, which resonated with a lot of people, the brand also used it to raise funds for a nonprofit that trains coach by donating $1 every time someone used the #UltraDad hashtag on social media. A truly thoughtful campaign we must say!

The great part about this holiday is that you can easily come up with marketing ideas that go with its spirit. Using red-, white-, and blue-colored products to create an exclusive Independence Day collection usually works quite well to attract shoppers.

You could also use these colors for your online and offline stores to give them the festive look. Stars and stripes work brilliantly too.

Vintage-inspired womenŌĆÖs clothing retailer Modcloth included red, blue, and white combination products in its Spring collection last year. The brand made these products available to shoppers from as early as the end of May to get people all set for Independence Day. 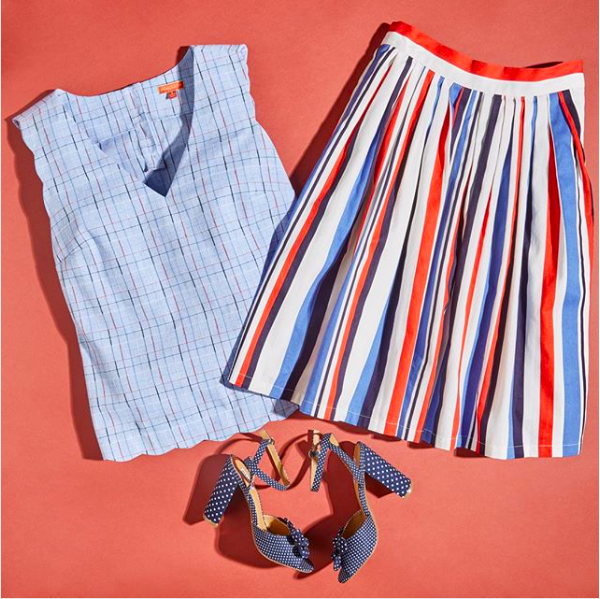 After a long, long break from holiday, we have Halloween!

Whether this means candy for trick-or-treating or decorations and costumes for parties, Halloween is when shoppers spend a surprisingly huge amount of money. NRF revealed that Halloween spending was around $9 billion in 2018.

If you hadnŌĆÖt thought of Halloween as a particularly profitable time, these figures should make you want to rethink your sales strategy. Also, with the holiday season following it, itŌĆÖs a good idea to start making yourself visible to shoppers from Halloween. And thanks to the extent of digital intervention, thereŌĆÖs no longer a dearth of avenues to engage your customers. 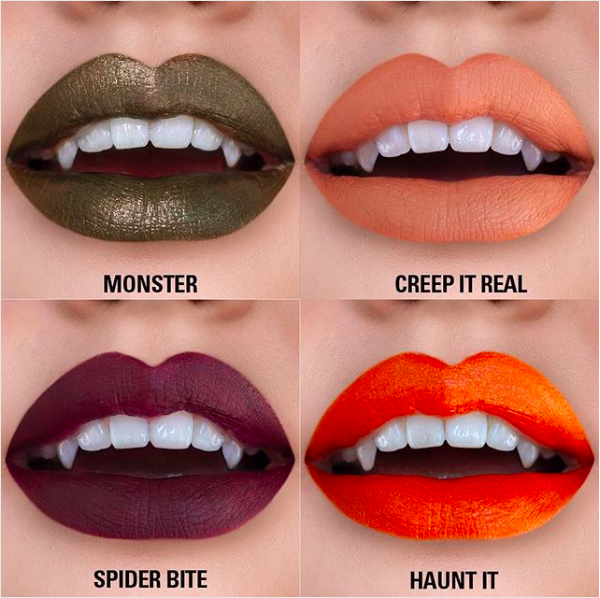 Kylie Cosmetics decided to take advantage of how Halloween is synonymous with makeup. By introducing Halloween-exclusive cosmetics with themed packaging and engaging its followers with themed photos and makeup artist suggestions for ways to use its cosmetics for Halloween on social media, they found the engagement sweet spot. This is a great way to go about marketing thatŌĆÖs shareable while staying relevant to the brandŌĆÖs products.

By Thanksgiving, you need to have a solid marketing campaign in place that sticks with people. Why? Because the much-hyped Black Friday arrives right after and you surely donŌĆÖt want to be unprepared for the sales boost on the day.

The hard part during this time, however, is competing against biggies like Amazon who can easily overshadow you with their heavy discounts and deals. So, you could choose to use the time to be different and make your brand known.

A lot of retailers forget that they can leverage Thanksgiving to engage with customers and get them all geared up for the holidays.

PostmateŌĆÖs Friendsgiving On-Demand is a great example of an effective Thanksgiving campaign. This campaign clicked really well because it was useful and convenient for the target market and hence a profitable idea. In essence, a marketing campaign is only as successful as it is useful. Embellishment rarely works.

Coming to Black Friday, 2018 reportedly saw a whopping $6.22 billion being spent just online! And clothing retailer Old Navy was one of the clear winners because of its incredibly clever promotional ideas.

While the brand did sell all its products on half off, what actually drove people nuts (the good way!) were the $1 cozy socks. And for every pair sold, Old Navy donated $1 up to $1 million to the nonprofit Boys & Girls Clubs of America.

The last week of December is the busiest time of the year for retailers like you. And with the right marketing strategy, your sales can soar enough to give you a massive year-end revenue bump.

YouŌĆÖd do well to start your marketing much ahead of Christmas. Some brands even start as early as post-Halloween. Most also deck their stores and web pages for the holiday season to bring in the Christmas spirit.

Your marketing strategy for the holiday season doesnŌĆÖt have to be about hard selling your products. You can work towards evoking emotion in shoppers to stand out from the crowd.

AppleŌĆÖs heartwarming ad for this holiday season is a perfect example of this. Apart from the girl, in the beginning, thereŌĆÖs no reference to a product. The idea instead is to get all those people creating amazing things but too afraid to share them to break away from their fears.

The brand beautifully tied this in with the concept of sharing gifts during the holidays. Jingle all the way indeed!

You could also go with a classic giveaway campaign on social media. ThatŌĆÖs what fashion retailer Boohoo did at the beginning of 2018. This works quite well to keep sales going post the end-of-year holiday season.

We hope these ideas of exceptional marketing will help you with your own. ThatŌĆÖs one way to make the most of retail holidays in 2019. Do tell us on which of these days you have seen the most sales in the comments below.

Thanks for reaching out! We will get back to you within 24 hours

Did you know that Primaseller also has

Thanks for reaching out! Our team will contact you to get started on Primaseller within 24 hours.

Thank you! You are about to discover the best ways to boost your sales! Click here to download your free guide.

Armed with a degree and a pen, loves to tell stories. When not telling stories, she also works. Hard to decide which one she likes more.

How to Deck Up Your Online Store for Holiday Sales

Why should every Apparel and Clothing Store have a Barcode System?

Surviving the Coronavirus Impact on Retail: A Detailed Guide